Cancer Care West along with Bowel Cancer Patient, Alan Cheevers, highlights the early warning signs of bowel cancer, as it claims the lives of 1,000 Irish people each year.

– Calls for increased awareness of the common symptoms, regardless of age
– Men are statistically more likely to ignore screening appointments than women
– Bowel cancer is the second most common cancer in men

Bowel Cancer Awareness Month, which is marked annually in the month of April, Cancer Care West, a charity dedicated to supporting those whose lives have been affected by cancer diagnosis, highlights the importance of screening. Early detection is key as 60% of all cancers diagnosed through screening were at stage one or two, according to a recent report by BowelScreen, meaning that they were found at a stage where treatment is likely to be successful.

Speaking about the importance of early detection, Prof. Maccon Keane, Consultant Oncologist at Galway University Hospital, has urged all those eligible or with symptoms to seek screening: “The treatments available for bowel cancer depend on the stage and the earlier the stage, the easier the treatment. If caught early enough, the treatment doesn’t require an operation and can be done through the colonoscope.”

Describing the most common symptoms of the disease, Prof. Keane urges anyone with warning signs to seek advice from their GP: “The most common symptom of bowel cancer is the passage of blood in the stool, if you have even one episode of blood in the stool you should bring it to the attention of your GP. If you notice a significant change in bowel habits that is persistent, then that should be brought to the attention of your GP as well.”

Alan Cheevers, a Galway City East Counsellor, who is currently receiving treatment for bowel cancer, described his own experience with symptom diagnosis saying: “I was suffering myself from the passing of blood and irregular bowel movements. That’s when I decided I needed to see my GP and have a colonoscopy to get it checked. That is where they found a tumor in my bowel and shortly after that, I was diagnosed with bowel cancer.”

Aiming to raise awareness of the importance of screening, particularly for men who often attach a stigma to health checks, Cheevers continued: “The month of April is the month where bowel cancer awareness is highlighted, and it would be great to see as many people getting checked as possible. I think it is important, especially for men, that we have regular checks and take responsibility for our health. Research has shown stark differences in figures which reveals poor uptake among men (49.3%), in comparison to 61.6% of women who avail of this potentially lifesaving cancer screening year on year.”

In Ireland, bowel cancer is the second most common newly diagnosed cancer, and the second most common cause of cancer death, claiming the lives of 1,000 Irish people annually. Almost 2,500 new cases of bowel cancer are diagnosed every year and this figure is set to increase significantly over the next 10 years, due mainly to an increasing and ageing population.
For further information on screening regardless of age and to learn more about signs and symptoms go to: https://www.cancercarewest.ie/bowelcancer

If anybody has any questions or concerns please make contact with our support services either by emailing [email protected] or calling 091-540040. All services are free, confidential and delivers by professionals.

Cancer Care West Annual Report for 2020 is now available to view online. Click on image below to view. 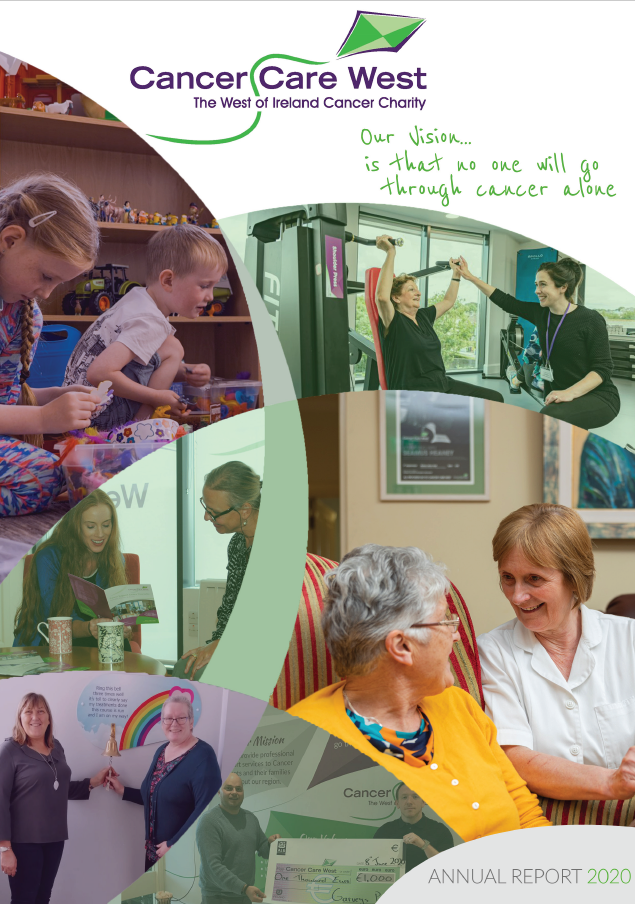 We are currently enrolling for our CUBS Programme

CUBS Programme – CUBS is an online structured bereavement support programme developed for children aged between 9 and 12 years whose parent has died from cancer. Through play and art, children will learn about grief responses and learn how to cope with feelings

This programme is available nationally anywhere in Ireland

This programme provides group support for children aged 7-12 who are experiencing the impact of a parent’s cancer diagnosis. Using drama, art and play children develop an understanding of cancer and learn to deal with their feelings. The group meets online to facilitate ease of attendance. 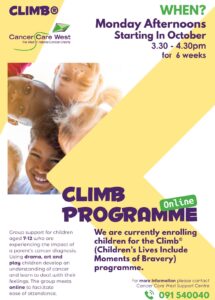 Just When You Think It’s All Over

Most people are familiar with the basic routine of cancer treatment. It’s a tough regime, regardless of the format and severity of treatment, so the end of treatment is a momentous day and thanks to advances in cancer treatment it is often seen as the day a patient can press the re-start button and begin getting on with their lives again. However, this is often not nearly as easy as people think, so while family and friends and oncology teams see the patient in recovery and doing well, the patients themselves are often struggling to cope with the aftereffects of the regime and the build-up of toxins in their system.

Vera McKeon talks of her experience with breast cancer with this very point in mind. “I was diagnosed with Her2 positive breast cancer in 2018. As a nurse myself I was familiar with what would come and made up my mind very early on that I would take this head-on and work my way through it in as positive and confident a manner as possible. I employed every trick in the book to keep my positivity going, even dressing in the brightest colours with full make-up on to attend appointments and the treatments! Finally, the last day arrived, we celebrated quietly. It was over, my chances of it returning were very low and now I could get on with “normal” life.”

However for Vera and for most other patients the end of treatment is not the end of the challenges of cancer. Over the next few months Vera tried hard to return to her normal routines, taking daily walks and each day trying to do a little more than the day before. It wasn’t working. “The fatigue was so debilitating I could not manage even the small everyday tasks and over the course of 2019 and into 2020 this really started to affect my mental health and my life in general. I was so frustrated that just when I should be having a massive pick-up in my energy and activity and living life even more to the full than before, I was actually spending hours every day resting after short walks or light tasks. This was compounded by disturbed sleeping patterns which left me more fatigued and further eroded my ability to break this pattern.”

Having reached a point where she didn’t really know who to turn to, especially as this was during the COVID pandemic, Vera phoned the Irish Cancer Society who, together with the National Cancer Control Programme(NCCP) and Cancer Care West, had formed “Together For Cancer Concern” a network of support services which operates nationally offering online and telephone support for cancer patients throughout Ireland. Vera’s call was relayed to Cancer Care West who were offering Psycho-Oncology counselling to cancer patients and their families. Vera was duly contacted by Cancer Care West and started counselling with Dr. Cathy O’ Sullivan.

“It really was like the beginning of the beginning again” Vera remembers. “Through my sessions with Cathy I developed a much clearer perspective on what I had and was still going through. I began to understand that I was putting too much pressure on myself and setting my expectations too high. The road to recovery was not short, straight or easy. I don’t think I was really prepared for that in the same way I was prepared for the actual treatment.” Vera also started sessions with Emma Houlihan, a physiotherapist at Cancer Care West, who specialises in cancer rehabilitation physiotherapy. “Again it was like a lightbulb moment for me. Emma explained that I was trying to do too much too soon. This was causing me to constantly go beyond what my body could cope with and causing me to regress instead of progress. Through Emma’s guidance I developed a programme of exercise that worked for me and slowly but surely I built up my resilience and stamina until I was finally taking my much loved long walks followed by quality time with my family. The final element of my recovery programme was my Yoga sessions with Pauline, also at Cancer Care West, which helped to restore my spirit, another often overlooked aspect of cancer rehabilitation.”

Vera is now in a much better place in her life. Her energy has returned and her daily routine is pretty much back to normal. She is anxious though that others in her situation may learn from her experience. “My advice to anyone in my situation is as follows: The effects of cancer do not end with treatment; getting the right support is key to learning how to move forward; wonderful support like I got at Cancer Care West is available and is free but you must find it and avail of it; do what they tell you to do because it works; don’t be too hard on yourself as you cannot improve in leaps and bounds but with baby steps and small wins.” And a final word “Thank you Cancer Care West for supporting me on the final stages of my cancer journey. I could not have done it alone.”

We use cookies to optimize our website and our services. For our policies, please visit our
Manage options Manage services Manage vendors Read more about these purposes
View preferences
{title} {title} {title}